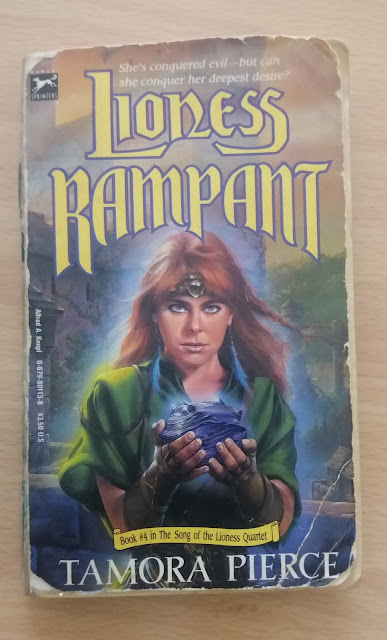 Having a passion for reading means inevitably you get to a stage where the number of books you own overtake your ability to read them all. I decided for my next read to pick up something old instead of hunting for something new. I dusted off Lioness Rampant, which has followed me since I was a teenager, from Lilongwe to Johannesburg, where it stayed in a box of other books 3 more years after I left for Blantyre before I had them sent to me. It was secondhand to start with and is still in decent condition.

Lioness Rampant is a fantasy adventure written in (1988), and it centres around a female knight who also happened to have magical abilities. It is the 4th in a series, which took some getting used to since I didn't have the first 3 books and there were a few blanks to fill in. However, the book did a good job of keeping the new reader informed about plot-relevant details, using call-backs and memories. The first in the series was about her becoming a knight while pretending to be male, and by the 5th book she is fully accepted by her people as a female knight, and is trekking to other lands, gaining more respect as she goes.

She is not fighting some imminent danger, she is rather taking a proactive approach and searching for a legendary Jewel which is said to maximise the powers of any leader who possesses it. She is not going to retrieve it for herself, but for her King. This is the driving plot, although there are plenty of complications as she deals with her past and present affections for not one or two, but three lovers, and has to make the decision of whom she will choose - and see if whoever it is would choose her in return. The pace of the story is in no way slowed down by the romance subplot.

I like how the story deals with being a woman as well as being a knight, and there was quite a few special moments in it:


Overall, an enjoyable read, plenty of contrasting scenes and characters, with tension building up and the stakes portrayed clearly. Recommended!


Make sure you click the subscribe button at the top of the blog to get updates on this topic and more.