How to Design a Treasure Hunt as an Icebreaker 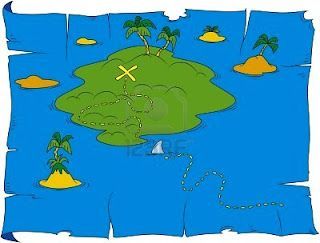 Back in my 2nd or 3rd year of university, my friend Ruby and I were living in a hall of residence (or hostel if you like). At the time, Ruby and I participated in student government (which I thought was a bit of an oxymoron), specifically in the sect that they called 'Health and Culture'. She was the elected head of this department and recruited me as a sidekick of sorts. What we were responsible for, amongst many other things, was welcoming the fresh meat- ahem. I mean, 'first years' into the residence. I remembered what it was like to be fresh from high school, transferred from the top of one system to the bottom of another in one day. Many of them were far from home and didn't know where to start when it came to making new friends.
That's where we came in! We began to brainstorm on several ways we could get them to come out of their shells, make friends, enjoy their new environment (as well as the food which, little did they know, would only be good during Orientation Week). I came up with an idea to create a Treasure Hunt. The idea was to group them into teams, set up a few different trails which ultimately would all lead to one final location. I personally couldn't wait to get started making up the clues!
I think a treasure hunt (also known as a scavenger hunt) is a great way for any crowd of people in a relatively large space to have fun and learn teamwork. Envision it working at office team building events, birthday parties, kids parties (adjust clue difficulty), and any event where tension needs to be dispersed.
How to design the hunt
After some thought, we realised we would have to work backwards. If, say, we wanted 3 separate trails, we needed to start by writing 3 separate clues that led to the treasure. So we set it up in approximately this order:
1. Have a notebook where you will write your own map of the trails - a Treasure Hunt Plan, if you will. On this, make sure you label each trail so not to get confused. DO NOT let these notes get into the WRONG HANDS (see, it's and adventure already)
2. Decide how many stages you will have. For the purpose of this example, we will have 4 clues per trail.

3. Decide on where the final prize will be located. Think of 3 ways you can create clues leading to that one location, and write these on separate pieces of paper. For example, if it's at a fountain, your clues could be:
(blue trail: Clue 4)  My tears may flow forever, no matter what the weather.
(green trail: Clue 4)  What goes up, must come down. Listen, can you hear the sound?
(red trail: Clue 4)  I am tall but not solid, I rise only to fall again, what am I?

5. Once you have written all your clues, have your personal top secret Treasure Hunt Plan close at hand, then hide the clues carefully. If you use the above example, your Plan should look like this: 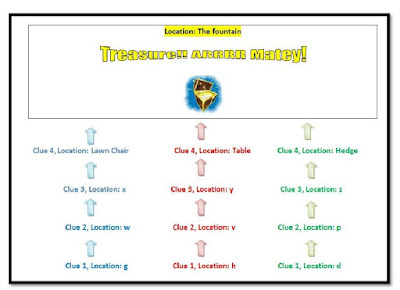 I filled in a few locations, but this part is really entirely up to you!

6. Assign the teams a colour, and hand each of them Clue 1 in their colour. If you want it can be a timed game.
Off they go!
After crafting the clues to be just hard enough for a team to figure out in 5 minutes or less, we hid the clues, and tested that they all led to the 'treasure' before gathering the underlings for a briefing.
Challenges
When laying out the clues, a common mistake is to place the clues in the wrong place. For example, you end up placing (blue trail: Clue 4) at the fountain itself. As you plant clues, make sure you have your notes, clearly marking the location of each clue.

Another challenge we had with the first year students was that there were cheaters. Some would make it their goal to hunt at random for whatever clue they could find, instead of following their specific trail and using the brains that got them into university. Sigh. This had the effect of ruining the game for others, because those who were following their trail would simply find one of their clues missing, then be forced to stop. Or start cheating in the game themselves, which was what they tended to opt for...
Ultimately, it had the desirable effect, getting them talk to each other at the very least, and become friends with their team mates at best.
I don't remember what the treasure was... but my reward was the fun I had creating it! I hope you do too. Tell me about your experiences, and whether you found methods to cheat-proof the game. Happy hunting!