September 06, 2011
Not too long ago, I asked a friend of mine, a fellow artist, to check out my blog (this one) and give me some feedback on it. She calls herself "Athena Zeus" and she acts, dances, sings and writes - I knew I could learn a lot from her.

I had expected a few points here and there on improvements I could make. However, what I didn't expect was a four day conversation on both of our Facebook walls - ranging from my original writing inspiration, to past theatre exploits, and even plans for the future...

Somewhere in the middle of all the artsy babble, I had a feeling it was taking on an interview styled format. Light bulb moment! Why not let my readers have a bit of insight on me? So with Athena's permission, I will let you eavesdrop on our little artsy chat! 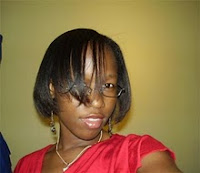 Athena Zeus I will start with the basics: 1) "The musings of a self-made artistic type woman... don't be shy about feedback now! :-)" Remove the second part about feedback, you don't need to say that. You've got this! 2) so why [noun].com? Interesting.
22 August at 08:45

Ekari Mbvundula Thanks! Noted... ok, why [noun].com? Hehe, it's just an analysis of how I used to search for things on the internet in the days of yore. In place of [noun] it would be 'car' or 'hat' etc :-) Thanks a lot for your constructive feedback
22 August at 11:37

Athena Zeus I like that you write about your experience after you perform a role. What drew you towards acting in the first place? Does it have to do with the writing? Also, do you write plays?...and then get the urge to perform them? You did say:"I will tell a story in whatever way I can, and so, sometimes I perform stories." I guess I want to know where the "sometimes I perform stories" comes from :)
22 August at 16:07

Ekari Mbvundula I think acting is like.. a pen to me. Or a keyboard. It's a tool to my writing, so I wouldn't say its better or worse but it is different. I love the fact that in theatre you get immediate response from audience! I also do some amateur sketching when I want to get an idea of what my characters will look like. Writing is where I begin, but storytelling is my craft.. I'm thinking of exploring film one day as well...
22 August at 17:46

Ekari Mbvundula Also I have written plays before, yes. And I have acted in all of them, usually in minor roles with the exception of my last play which I entered into a varsity drama festival. I tested myself playing a lead role & got a nomination for best actress which was flippin awesome B-) That made me want to do much more theatre, but its tough to get opportunities in the real world..
22 August at 18:06

Athena Zeus Oh my, they grow so fast! I'm so proud of you!!! What kind of stories do you normally tell? Do you work with certain themes very often? And what's the biggest challenge for you when you write? Also, I loooove how acting is like a writing tool for you. I mean, think about it, we write based on our own experiences... or something that someone said or did might inspire you to write. Therefore, the action in real life brings forth the ideas for a good play --so I can see how acting itself functions like a pen that writes the story.
22 August at 18:20

Ekari Mbvundula Fantasy is what first captivated my imagination... I read a lot of books about fantastical worlds, all made up by the writers. I read Lord of the Rings, Harry Potter and many other less known works. I wanted to do that! So I would tend to write stories about made-up creatures and universes. As I grew older, I began to have a deeper appreciation for character relationships. Stories like (off the top of my head) Shrek, where he starts off intensely annoyed by Donkey, but they have to work together. Or in Xmen where Wolverine is a loner who is pressured to work in a team. Real emotional conflict taking place in a world that doesn't exist tends to make that world more believable. As for my work, I'm acting out roles in my mind every time I write. If I don't feel what the characters feel, how do I expect the reader to?
23 August at 09:28

Ekari Mbvundula My biggest challenge... getting my fingers to meet the keyboard as often as they should. Nothing is more frustrating than getting the beginning, middle and end of a story finished in my mind in 30 minutes, but knowing it will take me 30 days or more to get all the details down, find the right words, and fill in the gaps. Writing is manual labour - I'm sure my brain has a 6 pack by now. But like all manual labour, it's definitely worth it to see the finished result!
23 August at 09:45

Athena Zeus Fantastical worlds can be so much fun! You can get insanely--and i mean topsy-turvy--creative with fantastical worlds. You can create all sorts of creatures, species, you name it. "Lord of the Rings" is an excellent example. As for your concern that if you don't feel what the characters feel then how can you expect the readers to feel or understand the characters--I think that is so crucial when you write the roles. No one can perform a role if they do not feel emotionally connected to their character. In acting, there is always a hint of the self within every role one plays. You cannot entirely negate your experience, let's say...crying. If your character is crying because of pain from losing someone, you cry AS the character, but you also cry from your own experience when you lost someone you loved so much and how painful that was. Therefore, Ekari cries too.
24 August at 22:54

Athena Zeus And writing is quite a task too--you definitely end up with a 6 pack brain indeed! It's one thing to think up the plot in 30 minutes, but I hope you revisit your work after some time. Let's say you write a story today and put it away for a week, the next time you read that story, you will experience it differently because YOU would have changed in that one week. Maybe you read something somewhere within that week, maybe you saw something, experienced something which- in the end- made you feel differently when you re-read your work. Most of the time, we edit to make it "better"...whatever we edit, we thought it was fine the first time, but suddenly we feel differently later. I have a problem with drawing a line on my edits. I become too critical. When is it "enough editing"? What if my work evolves to something absolutely different? Well, that's why they say save every draft. Don't delete anything entirely...who knows you might need that part you called "crap" again. lol
24 August at 23:02

Athena Zeus What roles do you like to perform? Do you follow a particular writing style? For example, I love using Archaic English, Early modern language etc...Shakespeare is obviously a huge influence on my part, but I also break out of it and use more hip and late modern English too. I bridge the gap! Any authors inspire you? What kind of characters do you enjoy writing in your plays? OMG, we should probably start another thread, I have to keep scrolling down to this on my wall haha!
24 August at 23:11